Tahchin is one of the most delicious Persian cuisines that no one can refuse trying it. An aromatic flavor with layers of various ingredients makes it unique in taste and color. It’s one of the few food options whose color and appearance are mouth-watering.

Tahchin with chicken is fluffy rice layered with cooked chicken. Persian families use different ingredients for cooking Tahchin, but the most common one is made with chicken, saffron, and yogurt.

When you see Tahchin with chicken, it’s golden as saffron, the king and most expensive spice in the world decorates it.

The best part of Tahchin gets called Tahdig, which is the bottom of the pot. The better you can make the Tahdig, the more skills you have at cooking. Persian men will appreciate you greatly, and you will make a name in cooking for yourself.

There are even Persian superstitions about Tahdig, which have spread to all parts of the country. Rumor has it if you eat too much Tahdig, Your wedding will be rainy. It’s true even in dry and arid areas. No one knows the origin of the legend. People might have invented the story to prevent the younger from eating Tahdig and enjoy it themselves. 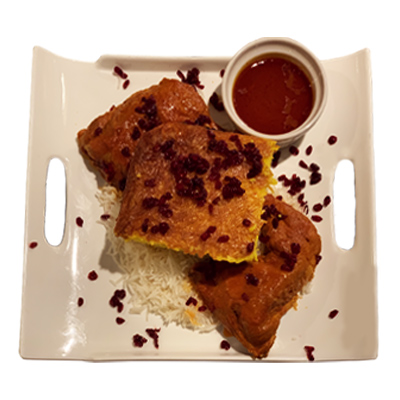 Tahchin with Chicken benefits and calories

Tahchin with Chicken holds K, E, C, A vitamins, omega 3, carbs, sodium, and potassium. Chicken is easy to eat and contains vitamins linked with mood. It also helps you build muscles, promotes heart health, and strengthens bones. Chicken is a good option if you seek to lose weight.

The king of spices, saffron, is a powerful antioxidant. It helps you improve your mood and treat depressive symptoms. It also helps you in weight loss. As saffron boosts mood, it’s perfect for gatherings and parties.

One serving of Tahchin with Chicken contains 229 calories.

Tahchin with Chicken recipe is as follows:

You need to cook the chicken thigh with a little water and onion. Cut the onion into small pieces. Put them in a pot with salt and pepper. Bring it to the boil, turn the heat to medium, and cook until the chicken becomes tender.

When tender, remove the chicken from the bones. Add to the bowl to boil in the broth for 20-25 minutes.

While the chicken is getting cooked, get to the rice. You need to rinse and soak the rice for a few hours before cooking, according to Persian cuisine.

Combine rice, water, and one tablespoon salt, then bring it to a boil. Cook it on medium heat and let it boil gently until water evaporates. You need to stir 2-3 times, so the rice doesn’t stick to the bottom. The process should take up to ten minutes, tops. If you see the scum on top of the rice, spoon it off. Pour the rice into a colander or strainer and wash with cold water.

Mix the saffron, cooked egg, and yogurt. Add two cups of cooked rice, then add the oil and butter. Put the baking dish in the oven until the butter melts and the mixture begins to dazzle. Remove the dish from the oven. Then spread the yogurt, rice, and chicken to the mixture at the baking dish’s bottom. It forms the first layer of Tahchin. Add some rice, chicken, spice for the second later. You can have 3-4 layers of the mixture with spices; choices are yours. You can add the broth mixture to the last layer.

Cover the mixture in the foil, make 2-3 holes in it, and then put it in the oven—Cook for one hour and ten minutes. Now you can see the golden brown color at the bottom of the baking dish. That is the part every Persian pays billions for it.

Be careful of the heat if it’s the first time you make Tahchin with chicken. Check it to see if the two above sides of the dish are golden brown or not. If not, bake for another ten minutes until it becomes golden brown.

When ready, remove the file with a knife and cut it into rectangular pieces as Persians do it.

Persians often serve Tahchin with chicken as the main dish, but you can have other types of Persian stews aside from it. The cuisine tells you to have the stew with white rice, but there is the first time trying a new taste.