Kabob is the most popular Persian cuisine that everybody likes it. Kabob is usually served at family gatherings, weddings, or special occasions. Kebab is, in fact, a Caucasian dish that was brought to Iran during the Qajar dynasty. Through time, the royal chefs and cooks gave kabob a Persian spirit that became completely different. Due to the high price of meat, kabob was a luxury for the royal family and the rich for a long time. Today, there are various forms of kabob in Iran.

The word Soltani Kabob in Persian kabobs means the mixture of one skewer of beef Koobideh with other forms of kabob.

Kabab Soltani is the combination of One skewer of Beef Koobideh with one skewer of Barg kabob charbroiled over an open fire. Persian kabobs are usually served with rice topped with saffron flavored rice and grilled tomato. The name suggests that it is prepared in the style of a king.

Grilling meat is the best way of cooking to preserve its benefits. Soltani kabob is ideal for those who feel weak, need more energy, and tend to build muscles.

You can taste the delicious Soltani Kabob in Las Vegas in Hafez Persian Restaurant. We have served the residents with the best Persian cuisine for 5+ years now. Being among the best top 25 restaurants in Las Vegas for two years in a row is a pleasure for us to serve you.

You could also order Lamb Soltani Kabob in Las Vegas online through the menu of the website. Ordering through UberEats and GrubHub is also possible. 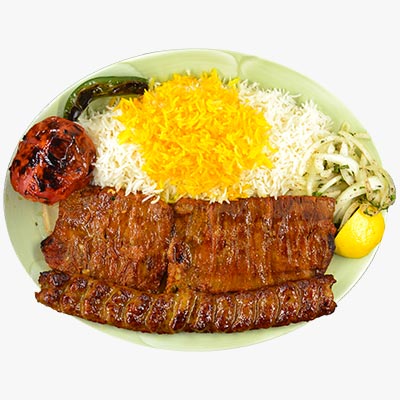