Pacha or Kalle-Pache is a delicious traditional Persian dish that dates back to 2.000 BC, according to recent digging in Persia. It is also common in Albania, Armenia, Bulgaria, Mongolia, and the Middle East. In Arabic countries, it is called “Pacheh,” and in Armenia, Azerbaijan, and Georgia, it is called “Khash.”
Kale Pache is served in particular restaurants in Iran, which is called “Kale Pazi” (meaning a place for cooking sheep head) or “Tabakhi”(meaning a place for cooking).
It is the most famous Persian breakfast on weekends.
Pacha is sheep head and feet soup. Pacha refers to a stew made from boiled sheep parts, which could include the head, feet, stomach, brain, eyes, tongue, and stomach. 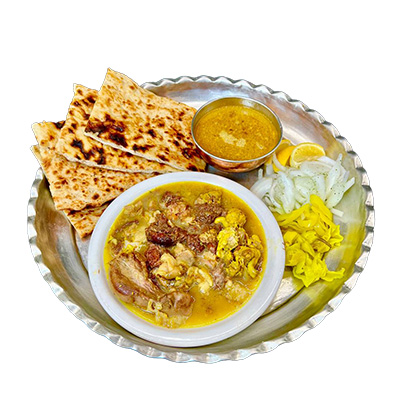 Kale Pache is a caloric bomb that provides all the energy you need during the day. It is rich in protein with high quality, which is essential in the growth, repair of tissue of the body and production of cells. Sheep’s tongue is fatty and contains a lot of vitamins B, especially vitamin B12.
Every 100g of Kale Pache has 300 calories. People who have high blood lipids or high blood cholesterol and uric acid, and have gout, should avoid using this food.

The cooking recipe for Kaleh Pacheh is simple but takes time. It can be summed up into putting the sheep parts in a pot, adding water, wait and let it cook slowly and entirely over medium heat.
The primary point in making Kale Pache is to clean the legs and the head neatly. Be patient and put it on medium heat until it is ready to serve. Using spices, which is mainly black pepper, and turmeric is another important point.You can clean Kale Pache yourself to make sure about its health, cleanness or you can buy it cleaned;

For serving Kaleh Pacheh, remember to remove the bones, and serve it with bread and lime, sour orange or cinnamon for easier digestion.

Order online
We use cookies to ensure that we give you the best experience on our website. If you continue to use this site we will assume that you are happy with it.Allow