Gheymeh Stew is one of the old Persian dishes that is extremely popular among Iranians. The Persian word Gheymeh means any meat that is cut into cubes. Most of the Persian stews have larger chunks of meat, but the meat in Gheymeh stew is usually cut into about one-inch cubes. It’s often perfumed with saffron and a hint of rosewater and is served with fried matchstick potatoes and fluffy Persian rice.
Traditional Gheymeh is cooked with beef or lamb, but due to the interest in using white meat instead of the red meat, some have chosen to use cubed chicken breast instead, which makes the recipe different from lamb or beef.
The vegetarian form of Gheymeh Stew is also cooked that mushroom or soya is used instead of meat. 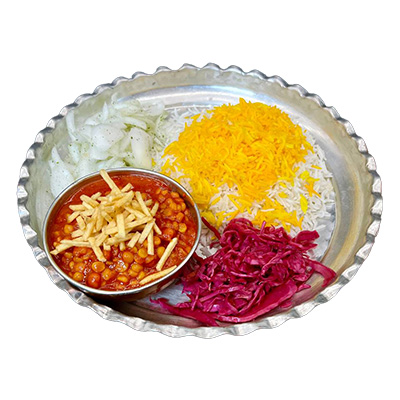 Order online
We use cookies to ensure that we give you the best experience on our website. If you continue to use this site we will assume that you are happy with it.Allow