Kabobs are an inseparable part of Persian cuisine. Kabob is a 200-year-old dish in Iran. It was brought into the country by Nassereddin Shah during the Qajar dynasty from the Caucasus. In the beginning, it was a dish only for the royal family and official elite due to the high price of meat.

Soon it became popular among common people and found its way through homes and restaurants. Throughout time, the Persian kabob went through lots of various changes. Different cooking methods with different ingredients were used to make them taste better.

Today, kabobs are almost served on every important occasion such as weddings, parties, birthdays, etc. Almost every Persian family gathering in nature is accompanied by grilling kabob.

Different forms of Persian kabobs have been shaped up since the entrance into Iran.

The word Soltani Kabob in Persian kabobs means the mixture of one skewer of beef Koobideh with other forms of kabob.

One skewer of boneless chicken kabob paired with one skewer of beef Koobideh kabob cooked over an open fire is called Chicken Kabob Soltani. Persian kabobs are often served with rice, tomato, lemon, and bread.

You could try the Chicken Kabob Soltani in Las Vegas in Hafez Persian Restaurant.

Hafez has served the residents with the best Persian cuisine for 5+ years now. We achieved be among the top 25 restaurants in Las Vegas for two years in a row. It has been our pleasure providing you services.

You could also order Chicken Kabob Soltani in Las Vegas online through the menu of the website. Remember that ordering through UberEats and GrubHub is also possible. 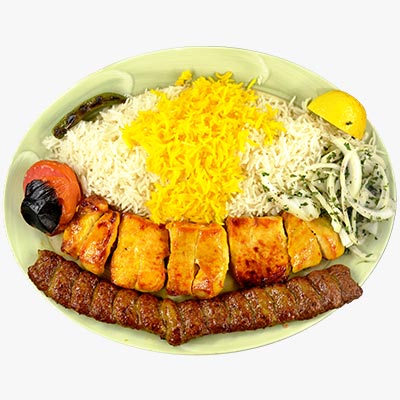