Akbar Joojeh is one of the traditional Iranian dishes that roots in Northern Iran. The beginning of this delicious food dates back to less than 100 years ago.

Ali Akbar Kalbadi had a small cafe in Gelogah county in the eastern Mazandaran. He served the residents tea, breakfast, and hubble-bubble.

Kalbadi then started serving food in his small cafe and turned it into a restaurant. They provided lunch to travelers and truck drivers who passed the region.

By then, Kalbadi started serving chicken in his new way. The new chicken was flavored with lemon, salt, pepper and fried in oil. They served the chicken with saffron rice. The new food was delicious as Kalbadi prepared a special pomegranate sauce. Soon it became popular and got called Akbar Joojeh after his name. People even called the restaurant Akbar Joojeh. Rumor has it that customers teased Kalbadi by calling him Joojeh (chicken) as he was short and slim.

Ali Akbar Kalbadi started new branches with his family in Mazandaran and Golestan provinces. He managed to expand his business and make a great name in the food industry.

Now Akbar Joojeh is served all over Iran and has branches in the US, Canada, and even Gulf states. 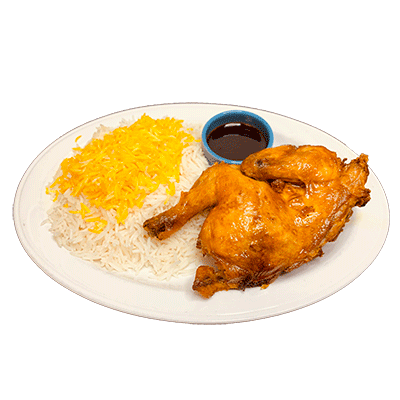 Akbar Joojeh contains A ، C ، D ، E ، K vitamins. As its high in protein, it could raise your energy level and improve your muscles. So the athletes could take advantage of it.

The ingredients of Akbar Joojeh is as follows:

You can make a special sauce to make the dish more delicious. Mix pomegranate paste, garlic, walnut, and water lemon with olive oil. Serve the chicken with this amazing sauce to enjoy more of your Iranian dish.

You can grain the garlic too, choices yours. You could pick red pepper instead of black; it’s up to your taste. However, the original recipe recommends black pepper.

Wait until the color changes, lower the heat, and put the lid on. You need to flip the chicken parts, be careful not to burn them. They should cook for 20-30 minutes.